Over the last few weeks, coming home from work and cooking whilst listening to some music has become one of my greatest pleasures in life. Sometimes it is accompanied by some great dancing but mostly there is lot of terrible singing involved. Today I decided a prawn stir fry would hit the mark for a few reasons: 1) I love prawns 2) a stir fry is quick and easy and 3) it’s a relatively healthy meal.
I’m not much of a cook and by that I mean my culinary repertoire is limited. The meals I can conjure up are pretty decent; it’s just that I haven’t cooked enough in recent years to confidently whip up a vast variety of dishes. This is something I hope to change over the next few months, starting with stir fry. I have made a stir fry on many an occasion but this is the first time I didn’t use a stir fry pack, the type that should really come in garish yellow packaging saying Stir Fry for Idiots.
I searched for a few recipes online and found this to be the simplest and by simplest I mean it had the smallest amount of ingredients that needed to be purchased and prepared. As with most stir fry recipes you just chuck everything in and hope for the best. Thankfully, the skill levels needed here are somewhere between making a cup of tea and not burning the accompanying slice of toast.
The music that accompanied me this evening was Michael Jackson’s Michael. I know I slated it in my review earlier but there’s a couple of tracks on there I am guiltily addicted to.
Ingredients

Of course, I went and ruined all the healthiness by making tempura prawns to go on top. 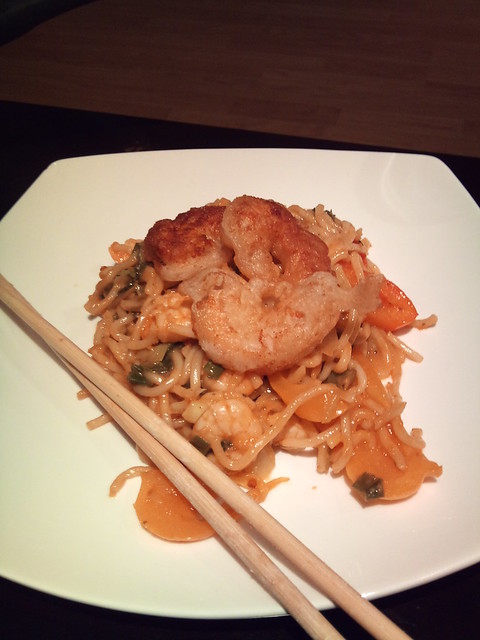